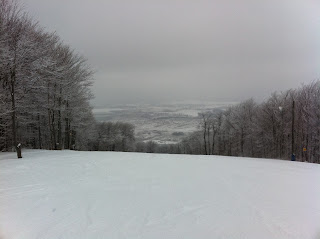 Last weekend some friends and I went to West Virginia to play in the snow.  I hadn't done any snowboarding in at least two years and knew I was going to rusty for sure.  When I was packing I decided to just take one board so the Burton got left at home and the Libtech Emma Peel got loaded in the car.  The drive was longer for me now that I am driving up from Charlotte instead of from the DC area.  Of course nothing in Davis WV has an actual address for me to enter into the GPS so I just winged it with my iphone map.  It found me a nice route but seems to favor the twisty winding back roads.  The drive wasn't too bad but it did get a little sketchy for the last couple hours due to the dark and snow coming down.  I used the GPS as a heads up display so I knew what curves were coming up ahead.  Finally, my video games skills come in handy in the real world.  I was hoping to get to the Ski Barn to drop my board off to get waxed and tuned.  Of course they close at 8pm and I roll up at 8:15pm hoping that they might still be there.  It was a ghost town! Oh well, the boards in good shape so I headed to the house.  It was a great first night of spicy chili, beer pong, hot tubing and general goofiness thanks to a big bottle of Jäger. Who the hell brought that thing anyway?! Oh wait.......that was me.
The next day I was a little slow but we got things worked out and had tickets and rentals (for those that needed it) ready to go by 10:30 or so.  The first day of boarding for me was a lot of shaking off the rust and remembering what I was supposed to be doing.  It was cold, snowing and WINDY! By the end of the day I was pretty fluid and having fun.  Then it was another night of great friends, great food, many beverages, hot tub, and funny antics.  The second day of boarding I went out with the boys and we had a great day making all the different runs on the hill.  It was warmer on this day which was nice because the hill wasn't all ice.  It was a little slushy but I just called it east coast power and had a blast.  The final night of great food, drinks, hot tub and playing pool.  Daylight savings throws a monkey wrench into the works when you stay up until 4:30am and have to be up early (an hour earlier than early thanks to DST) to check out of the house.  Thankfully I am quick to get moving and had the car ready to go in no time. I said my goodbyes to my great friends and headed home. Thankfully I could use the GPS this time and it showed me all the big highways home.  I had forgotten how much I liked to snowboard.
A huge thanks to Kels for setting everything up!
Congratulations again to Malc and T on their engagement. That was awesome news! 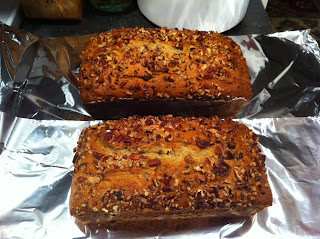 I even made pecan chocolate chip banana bread.

PS If you are interested in an AWESOME giveaway you need to check out And I ran...WHY?: Spring Break & a Giveaway!  She has some fantastic things in her giveaway package like candy, GU, socks, and sweet tunes.
Posted by SquirrelHead at 12:54 AM

SquirrelHead
Charlotte, NC, United States
I am a heavy Clydesdale that loves food and enjoys triathlons. I am working on training to get better but I hate the run.